Next year, starting in January or February 2019, I will GM a game of Dissolution, a 10-player Diplomacy variant* of my own creation. Dissolution is set in the 1990’s, just after the breakup of the Soviet Union. The variant is DP-based like Ambition & Empire and 1936; all three of these variants were included in the 2018 Tournament Through Time. 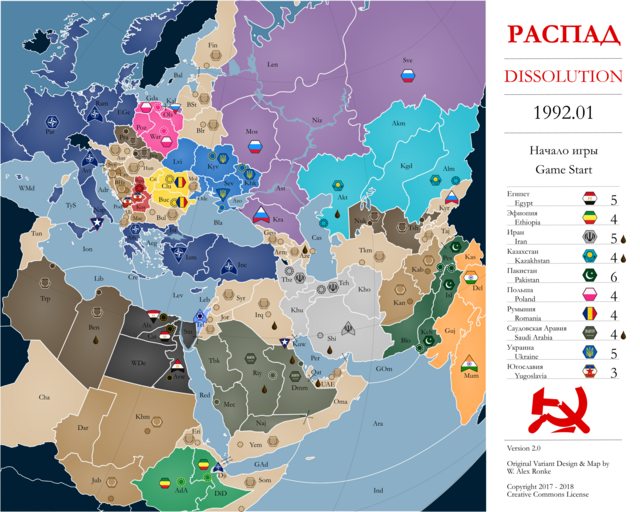 The most up-to-date draft*** of the full rules can be found on this site:
https://diplomacyvariants.wordpress.com/dissolution-rules/

The rules are admittedly complex, though the rulebook is full of illustrations and examples. If the length of it (75 pages) gives you pause, please have a look at the two-page summary**. It introduces all major concepts in Dissolution (though it does assume the reader is already familiar with DP variants).

This game will use a Google Group to host and deliver adjudication emails. Players will use email to submit orders. Players will primarily communicate with one another via instant messaging (either Slack or Discord, not sure which yet), though they may use email as well.

I run a three-season rotation (Spring, Fall, Winter), with one season due each Monday and Thursday night. Retreats are handled ad hoc in between these regular deadlines. This pace amounts to 3 weeks for every 2 game-years. A similar schedule is currently being used for the Tournament Through Time.

* While the core rules are still recognizable as Diplomacy, Dissolution might be thought of as its own game at this point (similar in complexity to Machiavelli).
** This also contains some rather colorful language and some poorly constructed 90’s jokes.
*** There are some typos in the current draft that I’m working on correcting, with some help from an actual editor.